Top 10 things NOT to say to a pregnant women

I would like to do a post about my top ten things that people say that piss me off during pregnancy:)

1) Hoping for the gender of your choice.
Why does this one seem to make people uncomfortable. Before we knew what we were having we would always have people ask what we're hoping for. I was honest with them and told them I want a boy they'd get super uncomfortable and say well I'm sure all you want is for it to be healthy. I would No SHIT! but I still want a boy. Why ask if your gunna be dumb about it?!

2) Do not and I mean DO NOT ever comment about a pregnant women's clothes! Unless its positive of course.
The other day we went to a football game and I wore my jersey that I had gotten last year, I'm not going to name names but a certain someone said "So I see you had to buy a new jersey." I said "No this is mine from last year." He said, totally shocked, "Oh really?!?! I just figured you had to buy a new one"
Seriously?! WTF! I wanted to say "No apparently either I'm just as fat as I was last year or I'm not as fat as you thought I was." But I was a good girl and bit my tongue and walked off.

4) When the parents share with you names they are considering for their baby do not make rude comments, I don't care how dumb or odd you think the name is, its not your baby so shut your mouth! And especially do not trick them into telling you and then run around behind your back and talk crap about the name and tell everyone the name.

Number 4 reminded me of another one. So we'll call this on 4 1/2) We of course have our name picked out and have only told our parents. We told them they are the only ones that know and do not tell anyone! Again not going to name names but one of them went and told some of their friends. Really? You can't hold in the secret of your grandchild's name? Well guess that teaches us not to tell you any other secrets.

5) Don't tell me horror stories about your pregnancy or a friend of a friends cousin who had a terrible pregnancy or delivery or miscarriage or ectopic pregnancy or ANY of that! I don't need more fears flooding my thoughts, I come up with enough on my own.

6) When I feel like venting about my pregnancy problems it does not reassure me when you say "it will all be worth it once you have that baby though." Duh! But right now I feel like crap so just shut up and let me bitch!

7) Also do not tell me how hard it is once you have a baby especially don't say "you don't even know" Just shut up I'm not an idiot I do know and understand, I have been around babies I have seen how hard it can be and I've seen how wonderful it can be. So just shut up!

8) Oh and lady at the eye doctors office, don't go off on a lecture tellin me to do yoga and eat this and not that and don't take any medications even though your doctor says its ok and don't get an epidural and blah blah blah, I just want my damn eyes checked so do your job and shut the hell up. People should not give their two cents about how you should go about your pregnancy, its you who is going through it and only you can decide what to do and what not to do. I don't think there's any right or wrong way, there's only your way.

9) When you ask me how I'm feeling and I say like shit don't just sit there staring at me head cocked and eyes all sad waiting for me to say more. I do not want to get into ALL my problems so move on and change the subject. Pregnant women get asked fifty billion times a day how their doing. I know some people like to bitch bout all their problems but in reality I don't, I'd rather not talk about myself, this might seem funny since this whole post is me bitching and talking bout myself but I'm silly that way;)

10) Do not tell me stories about how you knew this one lady who was pregnant once and she bitched all the time and was crabby. This just makes me hate you a little more and feel bad for her. A pregnant women has EVERY right in the world to bitch and you need to be nice and listen!

Please share this with all the ignorant people out there. I'm sure I have made these mistakes and I believe everyone gets a pass or two but people really need to be more careful, cause next time you say something you might not get a pregnant women who can bite her tongue so well;) 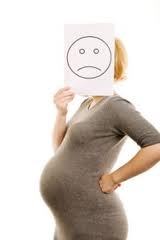 I'm sure I forgot plenty of things that should be added to this list! Feel free to comment below and add your own:)
Posted by Luna at 3:06 PM

Luna
My name is Erin but here in my computer la-la land world I'm Luna. I love DIY projects and I especially love when I can do them while being thrifty!